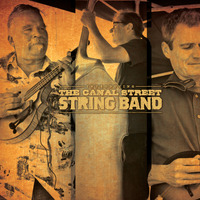 The Canal Street String Band has been rather busy in a bunch of ways, performing indoors and outdoors, official concerts, yoga centers and lots of other places. This time, we caught them in a more expected site, The Sportsmen’s Tavern,  for the first of a two-set show,  May 26 and the band really delivered.

The three-piece bluegrass, swing, country, old-time and folk band (you can throw in a bunch of other influences) is made up of Phil Banaszak on fiddle, mandolin, guitar and vocals; Dave Ruch on guitar, banjo, mandolin, spoons, jaw harp and vocals; and Jim Whitford (disclosure: our neighbor) on bass, Dobro, guitar and vocals. This award-winning and VERY talented group of musicians sounds impressive in theory, and they work together quite well as a band, the intricate rhythms of the Canal Street String Band’s music and the interplay between each other never getting in the way or hiding anyone else; the band has a CD, “Introducing the Canal Street String Band” at its web site.

Not being as well versed in old-time music as I’d like, I may have goofed up some of the song titles, but here is how the first set went; if you know the correct song names, don’t hesitate to let me know.

The band opened with a country swing bluegrass song (courtesy of Bob Wills) called “Miss Molly,” with Whitford on Dobro and Ruch on guitar nicely texturing some fine jazzy fiddle from Banaszak; the next song was an absolutely gorgeous version of “Shenandoah,” slow and elegiac, with the same instrumentation, and Whitford and Banaszak traded lovely lead work. Whitford played bass on a run-through of “Turkey in the Straw,” and Whitford sang lead on the almost too-much-fun romp of Hawkshaw Hawkins’ “Car Hoppin’ Mama.”

Next up was the instrumental “Song for a Found Harmonium,” not only enjoyable but one of my favorite new song titles; Banaszak played mandolin and Whitford went back to the Dobro for “Rambler Gambler” and “Keep My Skillet Greasy.” Ruch’s guitar and vocal work may seem more supportive at times, but it is the steady, on the mark work that allows the solo playing to succeed, and when he handles leads, you can tell he is having a blast. Ruch moved to bouzouki and Whitford to guitar joining Banaszak’s fiddle on the instrumental “Wrap That Rascal,” another fun song to which Ruch commented,  “We believe ‘Car Talk’ should replace its theme song with this song.” No word on whether or not the “Car Talk” hosts decided to stop doing new shows in response.

The Canal Street String Band then added some audience participation (always chancy when someone with a voice like mine is in attendance) with the a cappella sea shanty “Scarafina,” on which Ruch joyfully takes the lead in slightly rewriting the song to be based in Buffalo. This was followed by a Banaszak original (with a bit of help from Ruch) called “Shadowland,” an excellent moody, dark waltz with Banaszak on mandolin. The set was ended with three basically instrumental songs, from traveling music to old-timey, with Banaszak continuing to impress on mandolin.